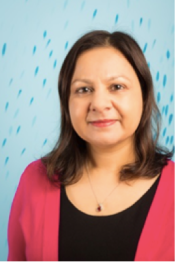 Shahana Ramsden blogs for us today on her 5 ingredients for co-production. She is the Senior Co-Production Lead NHS England and the Coalition for Collaborative Care (Co4CC). Shahana’s 29 year career includes supporting co-production with people who use services and carers and leading equalities programmes. Prior to her role with NHS England and Co4CC, Shahana worked as a Patient and Public Voice Manager for NHS England’s Patient Online programme. Shahana has been recognised by the Health Service Journal as a BME pioneer and was highlighted as one of 100 virtual change activists for Health and Social Care through NHS IQ (The Edge).

Working in Co-production with patients, people who use services and carers can be simultaneously simple and complex. It is messy, not linear. When it works well we have to prepared for a change in culture so that we avoid fitting people into boxes and are prepared to position the organisation around them.

I remember the first time that I was convinced to use the term “co-production” to describe the concept of working together with patients, people who use services and carers in equal partnership. The discussion took place in a basement room in the Department of Health with the previously named “user reference group”. The group voted unanimously to be named the National Co-production Advisory Group – symbolising their desire to move away from being a group that people would consult with, to a team of people who would work in equal partnership; co-designing, co-delivering and co-producing national policy.

As someone who has worked in the fields of engagement, involvement and participation for many years, it is encouraging to see so many organisations are now using the term “co-production” to represent a new way of working. However all too often organisations can adopt the new language, without changing the way they work.

I remember working for an organisation where I was employed as an engagement lead; part of an inflexible hierarchy, where it was clear that my own voice as a member of staff would never be heard. It did not take me long to realise that I was participating in a token exercise. I knew that if I felt invisible, it would be impossible for me to enable the members of our patient and carer groups to be heard. It is essential that senior leaders who want to involve patients and people who use services are prepared to model certain behaviours such as allowing respectful, open and honest feedback and a culture of listening. This will naturally move teams into a space where they are ready to hear the voices of patients, people who use services and carers.

The concept that co-production means starting with a blank sheet of paper is a good one, but we need to acknowledge that in reality this is unlikely to happen in a pure way. There is always a past, present and future to every piece of work, so planning in a strategic way and being honest about where we are can help to build trust and achieve better outcomes.

I have found that the most effective approach to co-production involves targeting specific areas that can be influenced. The question I ask is – how can the expertise of people who use services really shift the organisation into thinking differently? We need to put people in positions where they have the maximum opportunity to influence and where the concept of shifting power to patients is embedded throughout the whole system. This also involves making some difficult decisions about what we will not be able to influence.

I often find myself in rooms with senior decision makers where professionals have worked together for many years and developed positive and constructive networks over long periods of time. In contrast, when it comes to patients and carers, the same professionals are often quick to dismiss the so called “usual suspects” who have been using services for decades in favour of “new” people.

It is, of course essential to proactively include people who do not find it easy to get involved and to promote diversity at every level. However, the reality is that people who have been involved as patient or carers for many years have valuable experience of what has happened before and have seen policies and structures dismantled and then reconstructed. They have developed their own powerful networks, wisdom and influencing skills over many years. It is important to value their expertise and learn from them.

4. Use the right tools

I have “get me a patient” conversations several times a day. This starts with a plea for help at short notice, requesting a “real patient” who can share a 10 minute personal story, followed by the confession that there is no budget to pay for their travel. I acknowledge that there is a place for a personal story, which can often influence people at an emotional and human level in a way that has a powerful impact however to do this without a wider co-production strategy can lead to tokenism. This approach can become a dangerous quick fix that organisations begin to rely on.

It is important to use the right tools for each task. Co-production where patients, carers and people who use services become an extended part of a team, where people are recruited due to their influencing skills and experience is a long term commitment and needs to be well resourced. However there will be times where a large scale consultation of thousands of people is required, or where data and information from multiple studies and these programmes all within the remit of consultation and public engagement rather than co-production.

5. Make it a great experience

Often when we produce ground rules for meetings, an enthusiastic group member will add the words “have fun”. I welcome this as I feel that creating an environment where the process of co-production is meaningful and enjoyable is essential. It can be about creating a positively focused network where people feel supported and feel they are learning, building networks and they enjoy the process of engagement.

I welcome the focus of the Five Year Forward View on a “more engaged relationship with patients, carers and citizens”. However the risk is that organisations will get better at adopting the language of co-production, without changing their culture or approaches. I have adapted a well-known quote from George Bernard Shaw to read “The single biggest problem in co-production is the illusion that it has taken place.” Let’s have a dialogue about what we need to do to make sure the concept of co-production can move from illusion to a reality.

3 thoughts on “5 ingredients for co-production”